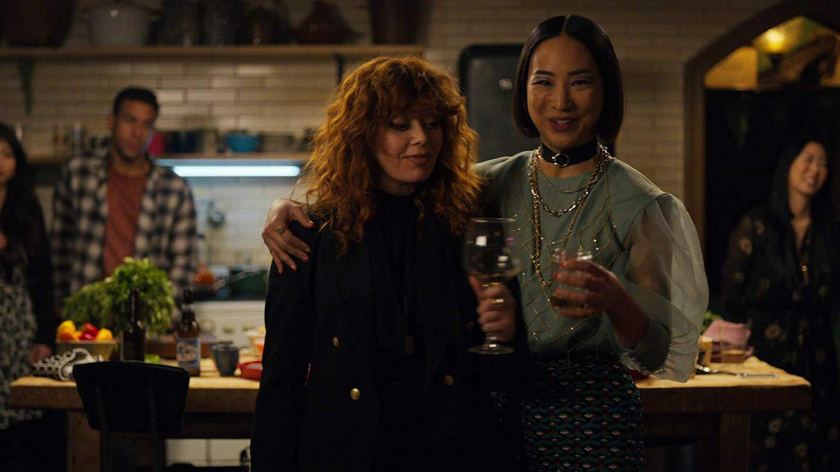 The number of times I repeatedly watched the magic that is Russian Doll may have equated to the number of times Maxine gleefully exclaimed “Sweet birthday baaabbbyyyyy!” in the show. It’s a shame to believe it introduced me to Greta Lee only then. The show’s real MVP, the true breakout star and life of the party!

The recent Netflix dark comedy series debuted its first season in February 2019 and has quickly trended and received excellent feedback from the audience. Lee shared the screen with the iconic Natasha Lyonne and though many would have resonated with the main actor, I, on the other hand, felt closer to Lee’s character Maxine. She was undoubtedly captivating the first time she enters the scene and has gotten much more depth in time undoing what’s behind the glamorous act she portrays.

Greta’s role as Maxine is modern and profuse. She is very much part of the art world. Involved in the beauty and chaos of the bustling city crowd yet Greta manages to deliver a grandiose persona in a fine, almost flawless manner with equal parts elegance, nonchalant dialogue, and humor. I rarely see characters of Asian descent be portrayed as the stunning, fancy, voguish artist of the group who has multitudes of interests other than her raw chicken and that in itself is a reason to celebrate her.

Maxine reminds me of a time in my life I actively threw and hosted parties. Handling too many preparations you end up just grabbing anything last minute and end up in an unorthodox look. It may come off peculiar but people get it. And though she might seem superficial on the surface, the complex layers of her character emerges in the later part. Maxine serves the best example of wanting validation and visibility– a metaphor that hits home to our representation on screen. Perhaps even sharing the same mid-life crisis, confusion and loneliness her best friends deal with as well.

Granted, Lee’s character is more secondary who doesn’t have to do a ton of heavy emotional scenes, God bless Natasha, she’s still gotten to do more than just the party hosting, smoking joints and looking fab even in a repetitive wardrobe. If you pay attention you’ll notice the mundane beneath all her loudness. The warmer, more human side of Maxine came through with the annoying morning phone calls, all the boring newspaper based stories she brings up, her Airbnb listings, thrift shopping odd objects, the panic, fights and everything in between.

Russian Doll is about friendships, too, after all. It’s heartwarming to capture how deep she feels for everyone. Underneath her lavish aesthetic is a caring, understanding being. “Under the fun stuff and the jokes,” Lee said in Vanity Fair, “there was something real there… something that goes deeper than the making fun of each other, and the sort of surface-level stuff—the lingo that you can establish with a close friend. There is love. And I’m so happy with the way that some of the female friendships ended up being portrayed.” It’s one of the show’s understated strengths.

In addition Greta told Elle, “I expressed a little bit of hesitation about taking on this role because I felt like this is gonna be actor suicide, to have to say the same line again and again, who would want to do this?” But honestly, she should get full credit every time someone uses Maxine’s award-winning line “Sweet birthday baaabbbbyyyy! from now on. I know I will.

Apropos to that she’s actually had a couple more witty-humorous lines in the series like the chicken rage moment, “If nobody eats my chicken I’m gonna fucking kill myself!” or when she yelled “I don’t know who you are and what’s going on here but either you two suck each other’s dick or get the fuck outta my apartment!” Also, who would forget the weather dilemma? “I never know what jacket to bring it’s a real problem in my life.” That is such a peak Maxine complex.

I’m curious to see where Maxine’s journey go from here. What is she going to wear next? What’s her new signature line? Will her Uncle Chong be present the next season? There can be a lot of takeaways one can get from the first season but personally, I’m grateful Greta Lee took the part and showed us that characters of Asian descent and Asian Americans can be multi-dimensional people who can be so much more.

In the meantime, while we all restlessly wait for its sophomore season, Lee and Jason Kim are writing and developing an upcoming show “KTown” for HBO, a dark comedy about the Kang family, kingpins in L.A.’s Koreatown. She’s slated to play Yumi Kang, the Brentwood Barbie who returns home and reconnects with her Korean roots. And if the series gets picked up, it will be the first HBO show ever centered on Asian-Americans!

She mentioned to The Cut that her character here reconciles with an Asian culture that she finds “embarrassing.” Greta explained, “It sounds extreme… But when you have no sort of representation, when you’re completely absent from media… no matter how strong your support system is, subconsciously, the subliminal message is, ‘You are defective.’ And I’m just beginning to understand the scope of how damaging that is to people and to myself.”

Indeed, Greta Lee is where the goddamn party is and we’re all keen to see more of her irresistible and enchanting antics. Follow her on Twitter and Instagram. She posts visually pleasing photos and you might just be fashionably updated through her feed.